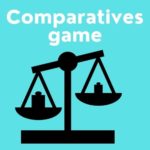 The game has 2 main screens. First there is a screen where you can view pairs of images and read a phrase that describes the comparison. You can click on adjacent images to scroll through them. The aim of this screen is to review the images and give an idea of the differences. On this screen you can also select which set of content you would like to use. To start the game, you click on the 'play' button.

The second of the main screens is the game screen. This shows pairs of images and requires you to make comparatives phrases to describe the differences. To make the phrases, you first have to select which adjective to use (remembering that the left image is always the subject). Then you are presented with 3 different forms of the adjective and you have to select which form is the accurate way to make the comparative. For example, the very first pair of images shows an elephant and a mouse. First, you choose the adjective 'big' and then you select the word 'bigger' to describe the difference. Once you have made 12 phrases, the set is complete and you get a score.

Each set of content has 12 pairs of images and a matching comparative phrase. The sets were chosen on the basis of how easy there were to represent visually. It would have been good to use comparative forms of adjectives like 'intelligent' or 'nice', but those are difficult to show in an image.

There is a scoring system in which you get points for correct answers. Getting answers correct in a row – without any mistakes – dramatically increases the score you get. There is also a timer through which you can get more score for answering quickly. Unlike other games, the timer does not cause a game over. A timer can make the game more interesting, but a lot of people email me feedback to say that it is often quite frustrating when it ends the game. The timer running out does however end the streak of correct answers. In this way, it is hoped that it can be engaging, but not so frustrating.

For comparative forms in English, the general rule is that words with 3 or more syllables use 'more' while shorter words just add 'er' or 'ier'. I did not think it was possible to teach or show this rule in the game; rather, students just have to know this and then look at or read the words. This game, like all the others, is really more about practicing things that students have already been taught in the classroom and is not really about instruction. I tried to use as many longer 'more' adjectives as I could; also, I managed to get good-better and bad-worse included.