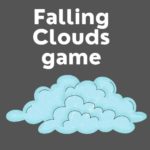 This is game for practicing English phrases – primarily aimed at ESL (English as a second language) students. An image is presented and you have to move the clouds around to create a matching phrase.

The idea for this game is to allow players to construct accurate sentences and acquire language in an engaging way. It is hoped that this game can facilitate language acquisition by having players associate the language seen with the meaning of the image that is presented.

As the game progresses a timing element is introduced and it becomes necessary to re-arrange the words before the timer runs out. When the timer runs out, the clouds start to fall downwards past the bottom of the screen. If this happens three times, the game is lost. This timer is intended to make the game more interesting and challenging as I thought that just moving the clouds around would get quite tiresome after a while. With the challenge of speed, it is hoped that the game and learning process can be more engaging. In order to prevent the timer being intrusive or annoying, it only appears after ten or so turn. What is more, it can be removed altogether if the player so chooses.

Clouds are used as it is hoped that they can be visually appealing and so being more engaging for players.