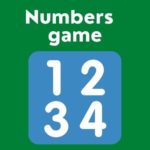 This is a small game for learning numbers in English. Students can click on the numbers to hear them spoken and see them written. The mini-game part allows students to practice listening and reading the numbers. While this game was primarily made for ESL students, young children may also find it useful.

The main aim of this game is to practice using numbers in English. This is done through the mini-game part in which students listen to audio and then click on the matching number. The hope is that this will increase familiarity and give practice in listening to how numbers sound.

The second aim is to present or introduce numbers for any students who do not know them. While numbers as a topic is quite basic for ESL learners, it is possible that some of the higher numbers may be completely new to some students and so they need some guidance on how they sound. This is done by displaying numbers on the screen just before the main game screen. Students can see all the numbers that will be used in the game and they can click to hear them spoken.

These groupings were chosen to give a broad range to practice with while trying to avoid repetition of similar numbers. All the numbers from 0 to 20 are included as these are the most common, but only some from 20 to 100 are used, as including every number up to a hundred would be somewhat excessive. Particular attention is given to the contrast between the teen numbers (13-19) and the multiples of ten (20,30,40 etc), as this is a difference that ESL learners often have trouble with. Set 4 focuses on the difference between larger numbers eg. 100 vs 1000 vs 10,0000. Sets 5 and 6 cover numbers from 100 to 1000, with set 6 being more precise. Finally, sets 7 and 8 cover numbers from 1000 to 100,000 with a focus on numbers that may sound similar, such as 16,000 vs 6016.

Originally, I was going to include numbers up to multiples of a million, but they ended up looking really long and would have required a really small font to display. Commas are used in all numbers above 10,000, but not for any below. This was a style choice: using commas too often can be distracting, but they are necessary for longer numbers. Also, some numbers between 1000 and 2000 are expressed as hundreds, eg. 1200 as 'twelve hundred' rather than 'one thousand two hundred'. This was again a style choice: for some numbers it is simpler to express in hundreds.

In the mini-game you take control of a small monster and you have to help him survive by pointing and clicking to make jump him on blocks. Three blocks are shown and each has a number displayed in the middle. The audio of one of these numbers is then played and you have to move the monster to the matching block. If you pick the correct block, then the monster survives, but if you choose badly, then the monster falls off the bottom of the screen and the game is over. Each round has 14 numbers and there are 8 rounds. There is also a timer and if you do not pick a block quickly, then you may fall off the bottom of the screen before you even move.

It is hoped that learning can take place through the association of audio/text with the numerical digit. Students will see and hear the numbers and then have that paired with the digits displayed. It is hoped that repeatedly doing this will increase familiarity and practice number ability. I think that the 2 variations of receptive recognition are covered here: in the game, students listen to or read the number and then match that to a numerical digit; in the presentation screen, students can see the digits and then can click to hear how they are spoken or see how they are written.